Supplying the full range of high-pressure steel cylinders to suit many applications.

Industrial and specialty gases are used in just about every sector of industry on a daily basis. Depending on the gas and application, we produce a wide range of high-pressure steel cylinders in various sizes and specifications.

The data sheet for our industrial gases products can be found in our download area.

For use in rescue services and hospitals as well as for use as self-contained breathing apparatus (SCBA) to fight fire and chemical accidents we manufacture compact and lightweight high-pressure steel cylinders.

The data sheet for our products for the medical and safety industry can be found in our download area.

Especially for the needs of professional and leisure divers we have jointly developed high-pressure steel cylinders, which meet the highest requirements in the underwater world, with our partners from the diving industry.

You can find the data sheet of our diving cylinders in the download area.

Gases used in the food and beverage industry for example help to preserve food or make your soft drink bubble. Our high-pressure steel cylinders do also fit in most commonly used dispensing systems.

The data sheet for our products for the food and beverage industry can be found in our download area.

Our high-pressure steel cylinders are used in state-of-the-art fire protection systems for stationary and mobile use. Together with our partners from this industry we develop customized solutions for the respective application.

The data sheet for our products for fire protection systems can be found in our download area.

Thanks to our experienced staff and our broad know-how, we are able to develop and produce high-pressure steel cylinder also for your special application. Whether aerospace, Formula 1, sports or leisure, we offer customized solutions for your application in the field of gas storage and transportation.

The field of application of our products ranges from industrial gases, healthcare and safety equipment, the food and beverage industry, fire extinguishing systems, to breathing apparatuses and scuba diving cylinders.

Beside our standard production program, we develop and produce high-pressure steel cylinders conforming your special requirements. Upon request we’re happy to completely assemble your cylinders including valves, valve protection and other accessories.

Dating back to the early thirties of the last century, fire extinguishers and fire-fighting equipment have been produced on our site in Apolda, a small town located in Thuringia, Germany, situated within the triangle of the surrounding and famous cities of Weimar, Jena, and Naumburg.

Already in 1957, the production of high-pressure steel cylinders was started in order to extent the product range to other fields of technical applications.

In the 1990 the company underwent a comprehensive restructuring process, accompanied by major investments in most modern manufacturing and testing equipment. Subsequently the company was certified according to DIN EN ISO 9001:2008 for the first time in 1993.

Since 2016 eurocylinder systems AG is part of the diversified industrial group Serafin based in Munich.

Today eurocylinder systems AG has an annual production capacity of more than 500,000 cylinders, manufactured on two production lines, and is among the top-5 of the European steel cylinder manufacturers.

Our qualified and experienced staff is performing rigor quality checks throughout the production process.

Our qualified and experienced professionals and engineers in production and quality management do perform all required tests and rigor quality checks throughout the production process.

All of our products comply with relevant current national and international standards, regulations, and guidelines applicable for their respective field of use.

For steel cylinders for the transportation of gases e.g. the regulations ADR, RID, RL 2010 / 35 / EU do apply. For stationary pressure vessels RL 2014 / 68 / EU or the AD instruction leaflet apply.

Approvals for other countries outside the European Union may are available upon request. 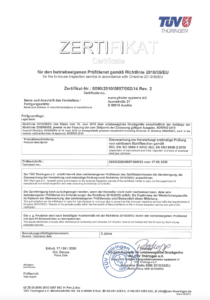 eurocylinder systems AG is a part of Serafin Group, whose philosophy is based on more than 150 years of entrepreneurial tradition of its shareholding family. Serafin invests into companies with the aim to foster their long term development in accordance with all stakeholders. This development is accompanied by the expertise of advisory board members Prof. Dr. Bernd Gottschalk, Wolfgang Ley and Prof. Dr. Heinrich von Pierer.

Our contact form

We use cookies to ensure that we give you the best experience on our website. If you continue to use this site we will assume that you are happy with it.OkPrivacy policy